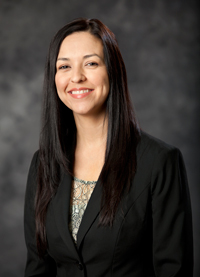 Vanessa Bueras began her career with the City of Maricopa in March of 2004 becoming the City's second employee. She held positions of Administrative Assistant and Deputy City Clerk before assuming her present position as City Clerk in August of 2006.

Ms. Bueras serves as Clerk to the City Council. She attends all City Council meetings and records all official proceedings, supervises the preparation of minutes and other documents, and directs the publication, recording, filing, indexing and safekeeping of all proceedings of the Council. She is responsible for preparation, organization, printing, and distribution of all public notices, agendas, and Council packets for City Council meetings. She is responsible for ensuring that, all notices, ordinances, resolutions, and other documents are posted, recorded, published in conformance with existing federal, state, and/or municipal laws, policies and procedures. She is also responsible for the codification of the City Code. Ms. Bueras supervises the daily activities of the customer service representatives for the City of Maricopa ensuring that all incoming calls are answered expeditiously, citizens are served in a timely manner, as well as ensuring that all incoming and outgoing mail for the city is processed. Ms. Bueras also serves as a Passport Acceptance Agent for the U.S. Department of State to be able to provide passport services to our residents.

Ms. Bueras serves as the City's Chief Election Official for the City of Maricopa. She plans and conducts City elections and other legal requirements of the City Clerk's Office in accordance with current federal, state, and municipal laws including translating all election materials into Spanish. She also serves as the Chief Records Officer of the City's Records. She supervises, directs and implements the maintenance of the Records Management Manual and the filing, safekeeping, and/or timely destruction of official municipal documents according to all federal, state, and municipal legal requirements.

Ms. Bueras is a proud graduate of Arizona State University. She currently resides in Maricopa with her husband Gabriel and three children, Christian, Moriah and Gabriel Jr.