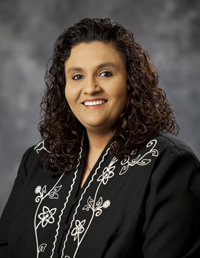 Julia Romero Gusse is a first generation American born and raised in East Los Angeles, California. Her parents (Romero’s) emigrated from Mexico in the late 60’s and she has three siblings, two of which reside in Maricopa with their respective families.

Councilwoman Gusse enlisted in the United States Air Force at 17 years of age. She went on to serve for the National Security Agency as a Cryptologic Technician and Morse Code operator with a Top Secret Clearance. She completed four years of active duty enlistment and received an Honorable Discharge.

While in the service, she met and married a fellow active duty service member and the Gusse family has resided in Maricopa since 2005. Mr. Gusse is a Navy veteran and supervisor for a call center in Chandler, their oldest child is a graduate student at Grand Canyon University, their middle son is in his senior year at Arizona State University and their youngest attends Maricopa High School.

Councilwoman Gusse is a former city employee that served for the Planning Department prior to running for City Council in 2010, she was subsequently elected and served from 2010-2014. While on City Council she served as a board member of the National League of Cities, Women in Municipal Government and the Hispanic Elected Local Officials Board. She established the Maricopa Let’s Move program, Operation Welcome Home and the Maricopa Veterans Town Hall. She holds a BA, an MA and is pursuing a PhD. She is currently a program coordinator at Arizona State University and a licensed Realtor with The Maricopa Real Estate Company.

Free viewers are required for some of the attached documents.
They can be downloaded by clicking on the icons below.