Sections of this Element:

The Maricopa General Plan is the guide to how growth and development will proceed over the next 10-15 years in Maricopa. Arizona statutes require municipalities to specifically identify those areas, if any, that are particularly suitable for planned multimodal transportation and infrastructure expansion and improvements designed to support a planned concentration of a variety of land uses, such as residential, office, commercial, tourism and industrial uses. This element includes policies and strategies that are designed to promote proper land use planning for multimodal circulation, conserve natural resources in a rational manner, and promote the construction of timely and financially sound infrastructure expansion.

One of the primary functions of planning is to understand and accommodate various types of land use activities to achieve a sustainable balance of uses while enhancing assets and preserving resources. Land use activities need to be properly situated to ensure the health, safety, adequate public facilities, aesthetics, protection of property values and overall quality of life in the community. The purpose of this element is to link land use, transportation, facilities, and infrastructure with specific implementation tools such as zoning ordinances, strategic plans, the capital improvement program, etc. Sustainability is a core principle of Maricopa’s growth management strategy to guide community growth in a manner that will enhance the lives of residents for generations to come.

As growth continues, land absorption will be guided in a manner consistent with the General Plan Goals and Objectives. Although single-family residential development may remain the largest user of land, the Growth Areas Map in conjunction with the Future Land Use Map are intended to broadly reflect the community vision to achieve a sustainable balance of uses within Maricopa and the greater planning area. Of equal importance to achieving a sustainable balance of land uses is the sequencing of how growth and development occurs. The growth element provides the direction for strategic implementation to ensure that the quality of life standards are met in a timely and acceptable manner. 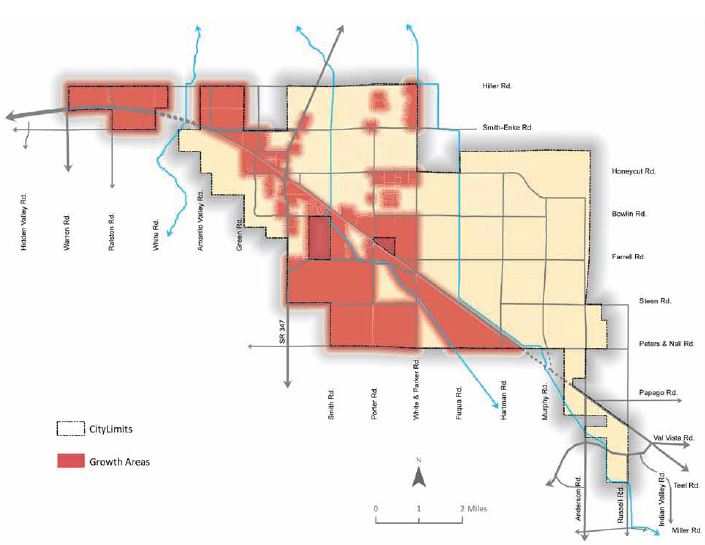 City growth projections were once staggering considering the 2005 population reached nearly 18,000, a tripling from 2004. Since 2008, the City’s growth rate has considerably decreased largely due to the greatest recession in U.S. history. The recession was aggravated by unsustainable home lending practices that fueled an artificial expansion of the home building industry, which made Maricopa one of the fastest growing Cities in the Country. The growth of Maricopa has slowed to a manageable pace and is expected to continue at a steady rate of growth with roughly a 4% increase in new residents each year through 2030. Table 5 reflects current population projections within the incorporated boundaries and the greater planning area. The projections are based on 2015 Mid-term Census results and the 2015 Maricopa Association of Governments (MAG) projections for growth in the Maricopa Planning Area with adjustments for the incorporated area. 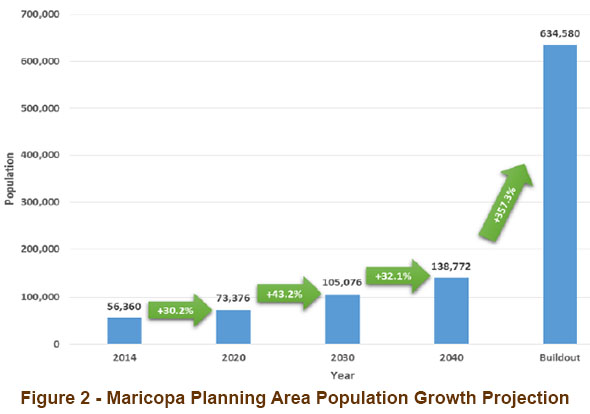 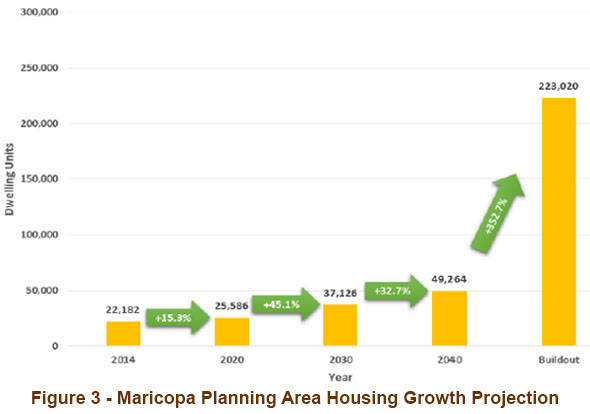 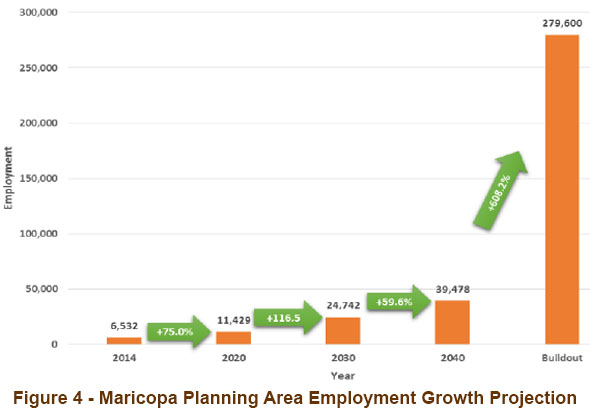 Employment growth (Figure 4) is expected to occur at a slower rate than population and housing growth, which reflects the community’s continued reliance on the Phoenix metropolitan area and other locations for jobs. The greatest growth in employment is projected to occur between 2030 and 2040. Implementation of this General Plan is intended to balance the rate of population growth with the rate of new employment.

At present, the City of Maricopa has entitled active developments that include approximately 11,000 undeveloped residential single-family production home sites (number excludes planned developments not in the platting process). The projected growth rate and annual new home permit averages suggest this inventory could be depleted sometime between 2025 and 2031. The available lot inventory is generally limited to single-family detached homes on lots averaging 5,000 to 8,000 square feet and does not provide a variety of housing choices such as large lots, custom home-sites, small lot clustered homes, or attached housing. Maricopa residents have a continued vision for a diversity of housing types to meet the needs of the changing demographics of Maricopa. For additional details, refer to the Housing Element discussion, Section II B2.

Changing demographics, community needs, and land resources, require that the City’s long-term development plans can accommodate existing and future needs. These shifts create the need to ensure a balanced mixture of uses, adequate support resources, and proper ratio of people to jobs, fiscal efficiency, and environmentally sustainable principles. Consistent with Smart Growth principles, Maricopa residents envision the future of the City to be developed in a pattern that can better adapt to trends and evolving lifestyles. The development of Maricopa as a collection of strategically located mixed-use Village Center areas (refer to Section II. B1. a. Village Planning & Village Center Development Pattern) with full service commercial and employment centers offers a dynamic growth pattern that is much more resilient than a typical low density homogenous development pattern. This perspective compliments the City of Maricopa’s strategy for creating a sustainable future with a variety of uses and housing choices. The Village Planning and Village Center concept is already underway in Maricopa with plans for the redevelopment of the Heritage District and the development of the City Center area. The Village Planning and Village Center growth pattern is further discussed in the Land Use Element and reinforced throughout this General Plan. 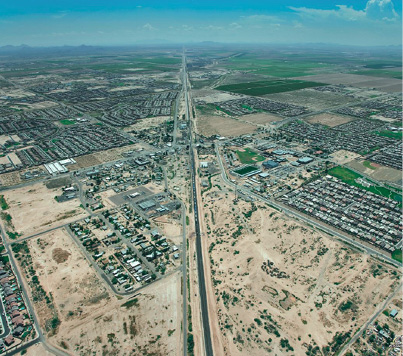 Current land use in Maricopa is predominantly single-family homes of a very similar format with a healthy supply of lots for new single-family homes, as described in the previous section. Future growth will need to balance this abundance of a similar residential use to grow with an integrated full- service economy. Maricopa residents are eager to experience more local options for shopping, entertainment, housing choices, recreational opportunities and transit options. They are an educated population who also desire local employment options that meet their education and experience levels. The City works to partner with others to create quality mixed use development space to meet these demands.

Growth areas have been identified that allow the city to capitalize on and leverage existing public infrastructure, such as water and sewer utilities and completed roadways, bridges, and intersections. Development requiring new public infrastructure extensions and maintenance to meet adequate levels of service and public safety access should be discouraged unless mechanisms are in place to alleviate the additional burden to public services (refer to the “Efficient Utility Planning “ and the “Density to Cost Ratio” discussion in Section II. H.3.).

The Growth Area Map shows the undeveloped or under developed areas desired for a mixture of uses in close proximity to existing public facilities and the transit corridor. Growth is encouraged in these areas to utilize the existing and planned transit services, water and wastewater infrastructure, telecommunications, electrical services, and public safety. Additionally, these areas are located in close proximity to the existing commercial retail corridor offering direct access to shopping, recreation and entertainment with limited reliance on the personal automobile. Refer to other elements for the various goals and objectives supporting development along the transit corridor.

The City has a continued emphasis on job creation, enhanced retail, and healthcare services reflective of the public visioning aspect of the Maricopa General Plan. Commercial Land Uses are focused around SR-347, portions of the Heritage District, various arterial corridors and along the major transportation corridors. Employment land uses are focused primarily along the major transportation corridors of Maricopa-Casa Grande Highway/Union Pacific corridor, the SR-238 corridor, and the Ak-Chin Regional Airport area. A concentration of employment and mixed use activities are also designated along SR-347 south of Ak-Chin and near several Village Center nodes identified in the southern portions of the planning area. With respect to public transit, the specific strategy considers high volume transit service corridors as opportunities to stimulate and support commercial and employment expansion.

Two large tracts of employment are the Volkswagen and Nissan test facilities, which are relatively low intensity land uses. In 2007, Volkswagen amended the General Plan Land Use map from Employment to Master Planned Community in preparation to relocate operations and allow for redevelopment of the site. Volkswagen chose to stay at the present location and continues to expand facilities and operations. Figure 7 - Land Use Map, and Table 7 are noted accordingly (Objective F2.1.2 discusses automotive industry uses in the City.) These areas are not presently identified as current Growth Areas, however, local employment and expansion of the economy is critical to the City’s economic health. New employment development opportunities should be carefully considered when out of proximity to existing infrastructure and services. Innovative facilities and public service solutions are necessary to overcome the lack of infrastructure in underserved areas. 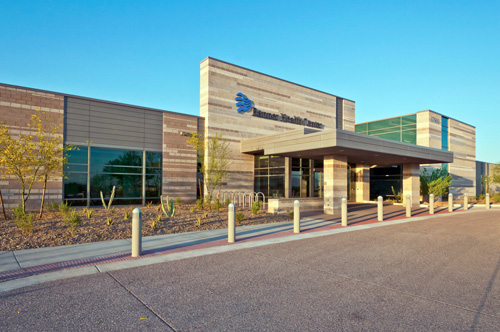 60% of existing local businesses in Maricopa are home occupation businesses. This is a very unique scenario embraced by the City, in part due to the limited availability of commercial office space. The City has implemented flexible Zoning Regulations to allow home occupations to grow while maintaining the residential character and compatibility with neighborhoods. Additionally, the City has implemented a Home Based Business ordinance to encourage the transition of homes within the Heritage District for business uses. The City will need additional office space to locate and retain home occupation businesses as they grow beyond what homes can accommodate.

In addition to creating concentrated mixed use Village Centers, Maricopa citizens also envision the development of large destination commercial and retail centers along transit corridors, and the development of industrial and business parks for local business and employment opportunities. Smaller scale shopping centers and convenience shopping and services are desired in close proximity to, or integrated within, existing and future neighborhoods.

Residential growth through 2025 is designated for undeveloped and under-developed areas west of White and Parker. Through the community visioning process, residents envision certain areas of the City to rezone to allow mixed-use, live/work, and higher density housing consistent with the Redevelopment Area Plan and future infill strategies (2040 Vision Housing strategy). Particular importance is directed towards revitalizing the Heritage District area where incentives for investment such as regulatory flexibility, acts to support mixed-use development, and maintenance of desired character may be readily achieved. In 2014, the City implemented zoning districts and redevelopment policies: Mixed Use Heritage (MU-H) and Transportation Corridor (TC) Overlay Districts, to create a mechanism that allows a mixture of uses, higher density housing choices, and transit oriented development within the redevelopment area. An update to the 2008 Redevelopment Area Plan is necessary to further this strategy and effectively guide the comprehensive redevelopment of this key area of the community.

The Land Use Map identifies Village Center areas for higher density and more intense mixed-use development. The Village Center concept is further discussed in the next section, Land Use Element. Village Center planning is designated for areas near transit corridors and high capacity arterial intersections, such as the Heritage District (SR-347 & MCG Hwy), and the City Center Area (CAC / San Travasa) along White & Parker to introduce pedestrian-friendly spaces and encourage transit ridership.

As a thriving community, Maricopa understands that growth is inevitable. Maricopa pledges to work with all landowners to support annexations that facilitate logical expansion of our boundaries in order to advance quality development. Input received from residents and stakeholders in Maricopa’s Planning Area suggest that many residents desire not to annex into Maricopa. The existing residential areas, such as Thunderbird Farms, Hidden Valley and other rural enclaves provide a needed alternative to the neighborhoods and housing stock available within Maricopa. Preserving these rural enclaves while maintaining and enhancing their unique character is important to Maricopa and the future of Western Pinal County.

The City also supports the preservation and enhancement of commercial agricultural operations and industrial activities, such as the Nissan proving grounds. These uses are valuable assets to Western Pinal County and Maricopa supports these activities to operate safely and successfully, now and into the future. Future requests to annex land into Maricopa must be found to further the goals and objectives of this General Plan.